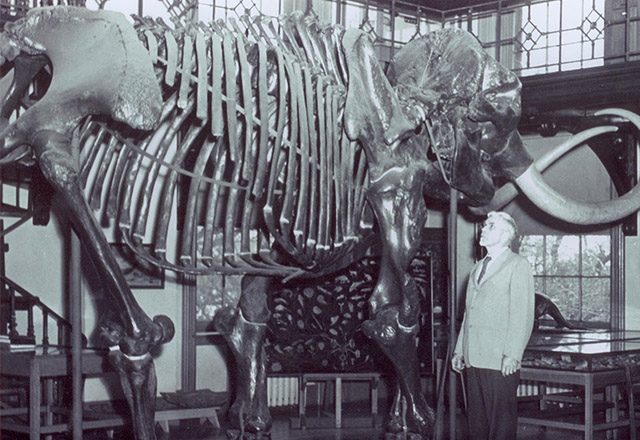 1950::Dr. Albert Hayse, former Geology Department Chair, in front of the Mastodon in 1950.

The Rutgers Geology Museum was founded in 1872 by State Geologist George H. Cook to exhibit the many specimens collected by the New Jersey Geological Survey, which he directed.

Henry Janeway Hardenbergh, a Rutgers graduate and descendent of the university's first president, designed the building, originally known as Geological Hall. Hardenbergh later earned fame as the architect of the Dakota Apartments and the Plaza Hotel. Dr. Cook, who taught chemistry and natural philosophy at Rutgers College, also founded the Rutgers Scientific School. Cook hoped the museum's instructional exhibits would cultivate the scientific interests of Rutgers students and the public.

The museum's earliest collections began to coalesce in 1836 through the work of Lewis C. Beck (1798–1853), a physician, botanist, entomologist, chemist and geologist, who taught at Rutgers in the mid-nineteenth century from 1830 until his death in 1853. Many of Beck's contributions are native to New Jersey, which include Native American artifacts, minerals and fossils. One of his most noteworthy exhibits includes fossilized dinosaur tracks, belonging to the carnivorous Grallator on display.

A collection of 2,400 specimens of fluorescent minerals was donated to the museum in October 1940 by George Rowe, a mine captain with the New Jersey Zinc Company. This collection consists of rare minerals, many of which are found only in New Jersey, such as those discovered during nineteenth- and twentieth-century zinc mining operations in Franklin and Ogdensburg in Sussex County. In 1968 the Department of Geological Sciences sponsored the museum's first annual open house and initiated an out-reach program that brought K-12 students to the museum for tours. As we enter the 21st century, the museum continues to educate students and the public about science, and does so in a historically evocative Victorian setting.