New Exhibit on the Evolution of the Human Diet Now Open

Written by Darshana Shapiro, PhD Candidate in the Department of Anthropology at Rutgers University 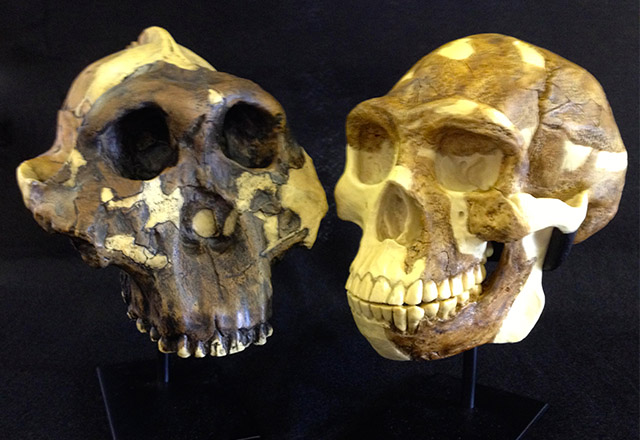 Modern humans today eat all kinds of different foods, from cheeseburgers to crickets to kale, but what did our hominin ancestors eat three million years ago in East Africa? Did “Nutcracker Man” (Paranthropus boisei) actually crack nuts with its powerful jaws? Were Neanderthals really expert big game hunters? And how do we know? The new exhibit on The Evolution of the Human Diet brings together some of the newest, most exciting evidence that paleoanthropologists use to answer these questions and reconstruct diet in the past.

Did you know that microscopic scratches and pits (called “dental microwear”) on the surface of teeth can tell you a lot about what a hominin ate? Paleoanthropologists can compare the pits and scratches on fossil teeth to those on the teeth of living primates with known diets to come up with hypotheses about what our ancestors were eating. In the new exhibit, you’ll be able to play the role of scientist and do your own comparisons, using pictures of dental microwear from both fossil species, like Australopithecus afarensis (Lucy’s species), and living primates, like baboons and gorillas.

You’ll also be able to learn about how paleoanthropologists are teaming up with chemists to figure out how specific elements, like carbon and nitrogen, can tell us what hominins were eating. Plants photosynthesize sunlight into energy using different pathways. These different pathways mean that different species of plants contain different types (isotopes) of carbon, which are preserved in the bones and teeth of hominins that ate them. See if you can solve the mystery of Paranthropus boisei, whose microwear and isotopes seem to say completely opposite things about their diet! 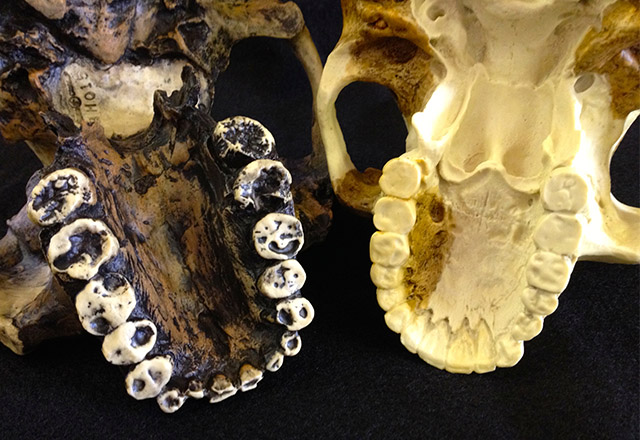 Primates are some of the only tool-using animals on the planet and our ancestors were no exception. Think about all of the tools in your kitchen at this moment. Now, replace them with a sharp-edged piece of rock.  How would that change what you eat? Along with the teeth themselves, paleoanthropologists also look at the tools that come from sites with fossil hominins to find clues about what they were eating. Check out the stone tools in the exhibit and try to guess what they were used for.

The Evolution of the Human Diet combines hominin anatomy and technology with the latest research on what our ancestors were eating. Whether you’re a vegetarian, a carnivore, or something in between, you’re sure to learn something cool about the real “Paleo diet.”