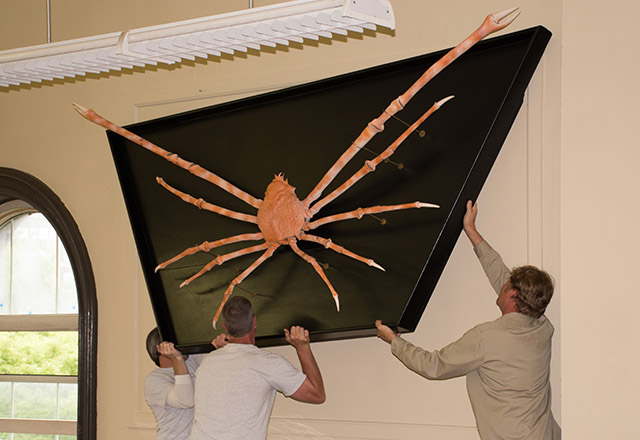 Japan sent several of its young citizens to Rutgers in the late 1800s to receive a Western education, and it showed its appreciation to the university in a big and unique way – with the gift of an 11-foot-wide exoskeleton of a giant spider crab native to that country’s waters.

Rutgers mounted the gift with pride on the balcony wall of a two-story room in Geology Hall – today home of the Rutgers Geology Museum – in 1896. But time and too much touching by curious visitors took its toll, and the badly deteriorated specimen had to be removed in the early 1980s.

Today Japan’s gracious gift once again adorns the Geology Museum wall after a three-year project to restore its bright reddish orange color and the integrity of all 10 limbs.

“It’s like night and day,” said Lauren Neitzke Adamo, the museum’s associate director. “It was falling apart, and many people wanted to throw it in the garbage, until we saved it.”

Contributions by Friends of the Geology Museum members funded the restoration work.

“The crab is up again, but that’s not the end,” Adamo said. The museum is now preparing materials to explain the history of this specimen and the science behind these creatures, the largest of which stretch 12 feet from claw-to-claw.

“A lot of kids are impressed when they walk up the stairs and see the crab up close,” she said. The task of restoring the crab to its former splendor fell to Bruce Mohn, a biological artist who has reconstructed fossils and skeleton pieces for museums around the world. He was no stranger to the Rutgers Geology Museum, having earlier worked on the museum’s mastodon skeleton. An extinct ice-age mammal similar in appearance to today’s elephants, the museum’s mastodon is so large that it’s the first thing visitors notice when they walk in the door.

The shell of the crab’s legs, Mohn said, was “very, very thin, like a paper towel tube.”  At first, Mohn was going to apply a technique he learned as an intern at the Smithsonian’s vertebrate preparation laboratory – soaking the shell in a mix of acetone and Duco Cement – but he soon realized it wasn’t going to be strong enough for this job. Instead he coated the inside and outside of the legs with a polyurethane resin typically used to repair fiberglass.

On the upper shell of the crab’s central body, known as the carapace, the thick polyurethane would obscure the fine details, so he chose cyanoacrylate – the chemical used in superglue.

But Mohn’s more difficult challenge was fabricating an X-shaped frame of threaded steel rods that would hold the crab legs in their natural position without being visible to viewers. The rods run through PVC tubes epoxied inside the polyurethane-hardened legs.

“It’s pretty close to the largest project I’ve ever worked on,” said Mohn, who has been doing biological restorations, sculptures and illustrations since 1993. The job took three years, mainly because the work involving volatile chemicals had to be done outside of his home studio during the summer months. But the result, he claims, is a job “that would stand up for 100 years.”

It was so large that he couldn’t assemble it at home and drive it to the museum. So he saved the final assembly for late May in the museum, where he mounted it to the original trapezoidal wooden display frame that Facilities and Capital Planning members restored.

Adamo hopes to showcase the crab in a dedication ceremony during the university’s upcoming 250th anniversary celebration.

Going forward, visitors may even include citizens of the country that offered the crab to Rutgers. The city of New Brunswick has sister cities relationships with two Japanese cities, Fukui and Tsuruoka, the former being the home town of Rutgers’ first Japanese student in 1867. Officials of the sister cities program will consider including the museum as a tour stop for Japanese delegations that visit New Brunswick in future years 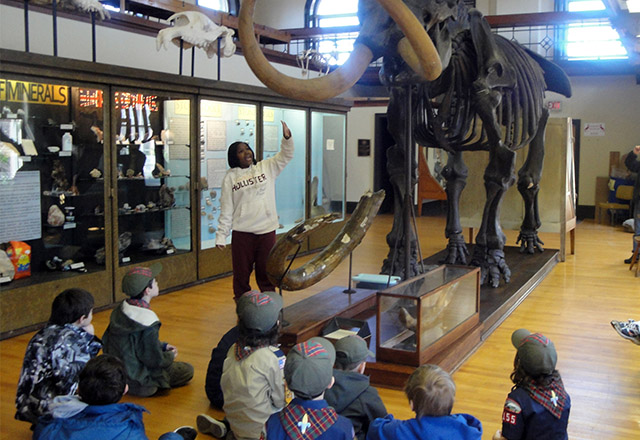 Looking for a field trip for your school or an outing for your group? How about a guided tour of the Rutgers Geology Museum? Tours can be book through out the year for any group of 10 or more people. Visit our tour information page for more details.